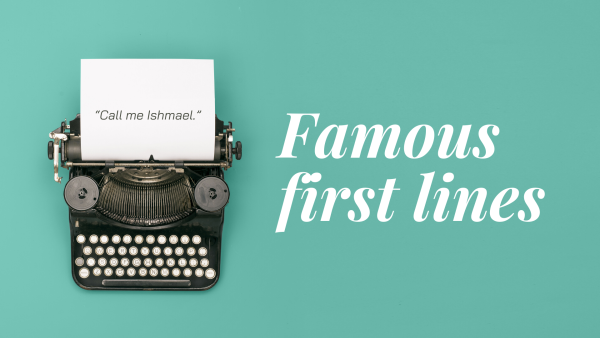 We have forever been warned to not judge a book by its cover. And so, we merrily go about making our picks based on blurbs, the author's past works, and through recommendations from fellow bibliophiles. Occasionally we might get influenced by the book's marketing frenzy, and maybe sometimes, when no one is looking, even buy one that has a pretty cover.

But what about those famous first lines of books? Words and sentences that, weirdly, carry the weight of the entire novel, its chapter, its characters, and the plot.

Take Moby Dick for instance. When it comes to famous first lines of novels, nothing can be as simple, yet complicated at the same time. A book about a colossal whale starts with a small sentence that comprises of only three words, "Call me Ishmael." As readers, we get to decipher this opening sentence in several ways. For a few, the words create a sense of mystery, leaving us wondering if Ishmael is this person's real name. Then there is the apparent Biblical connotation. While at the same time, we know that the novel will be told in the first person. However, it is also a line that could have no subtext at all and means precisely what it says.

When we talk about famous first lines from classics, one also wonders how much is the book's success responsible for the opening's iconic standing. Aren't there hundreds, if not thousands, of fantastic first lines, that are part of forgotten literature? Introductions that are lost along with books that for one reason or another weren't striking enough. So, it's perfectly acceptable to assume that the popularity of a first-line is linked inextricably with the success of the book. And then again, why shouldn't it be. What's the use of starting with a bang, when the rest of the novel fizzles away from memory?

Looking at the following 15 opening lines from classics, one interesting point to note is that they involve books from distinct genres, tackling diverse human emotions. These legendary lines originate from children's books and from narratives written by literary giants, the likes of whom we haven’t seen for centuries. Moreover, the stories inside the books are tales of friendships lost and found, complex relationships, and of love, tragedy, and despair.

This leads us to a question: if you are someone who has not read these classics, would you be brave enough to pick them up, based solely on the opening lines of these books? Do it, we say, for you shall not be disappointed! 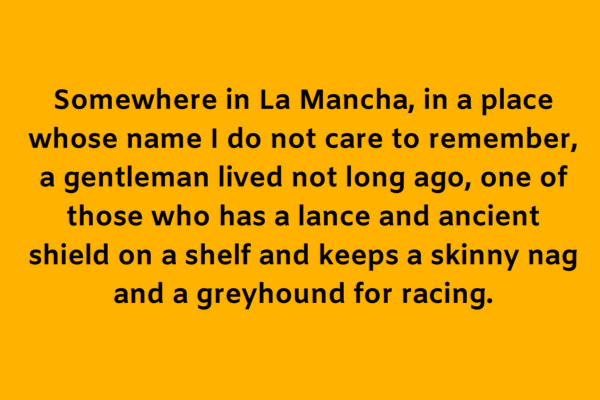 "Somewhere in La Mancha, in a place whose name I do not care to remember, a gentleman lived not long ago, one of those who has a lance and ancient shield on a shelf and keeps a skinny nag and a greyhound for racing." 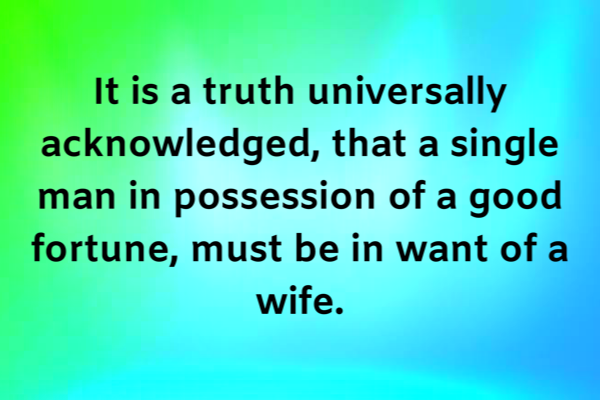 “It is a truth universally acknowledged, that a single man in possession of a good fortune, must be in want of a wife.” 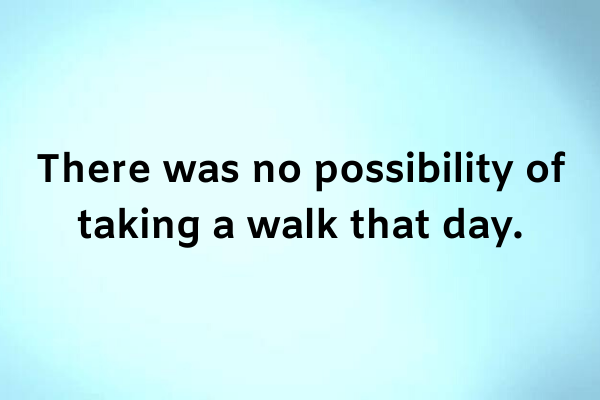 “There was no possibility of taking a walk that day.” 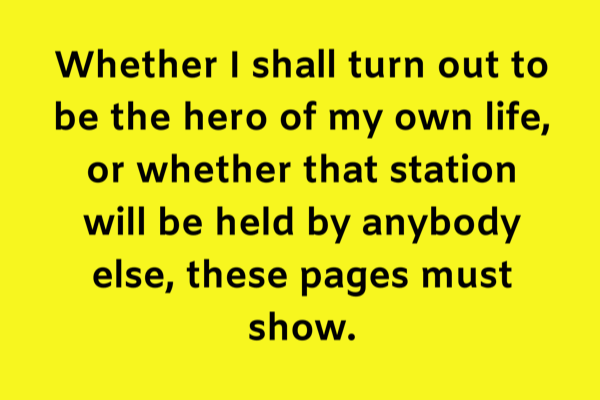 “Whether I shall turn out to be the hero of my own life, or whether that station will be held by anybody else, these pages must show.” 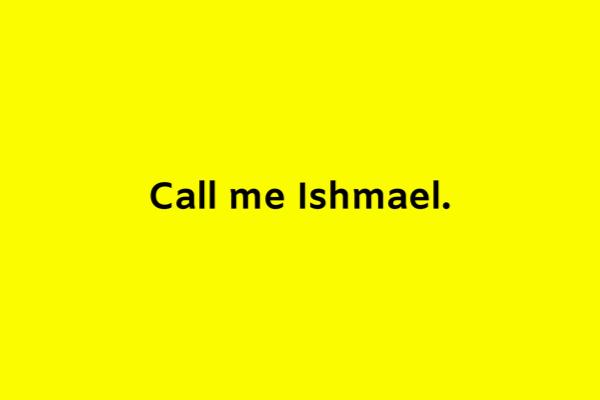 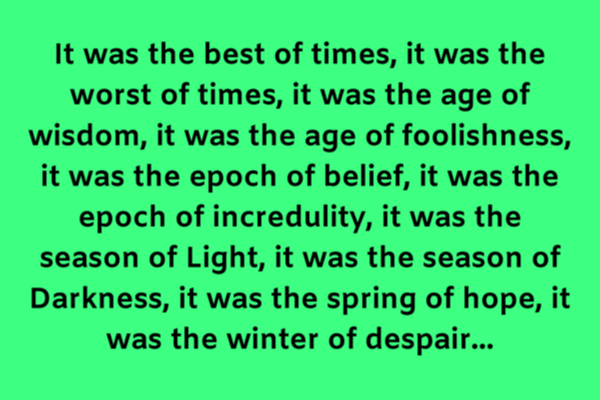 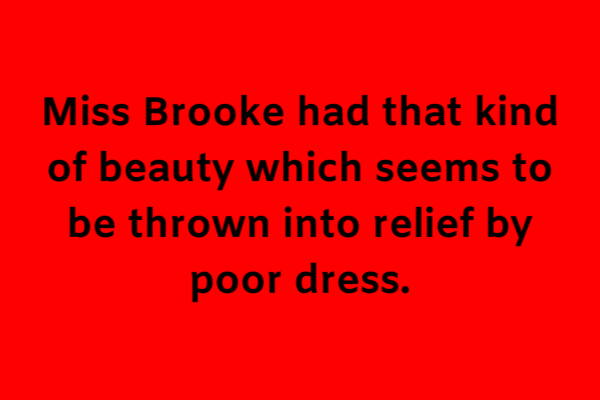 "Miss Brooke had that kind of beauty which seems to be thrown into relief by poor dress." 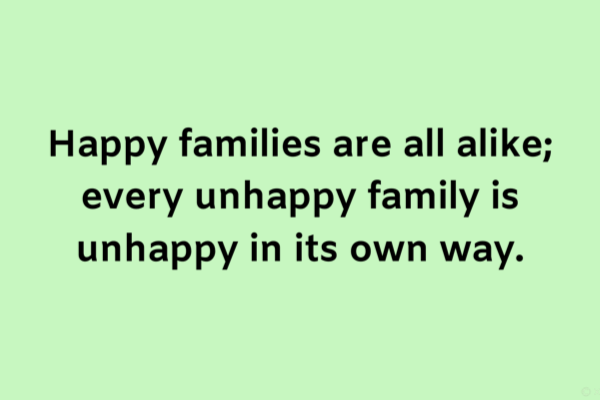 “Happy families are all alike; every unhappy family is unhappy in its own way.” 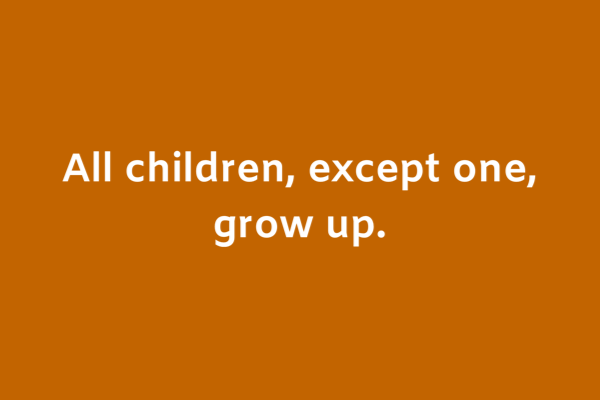 "All children, except one, grow up." 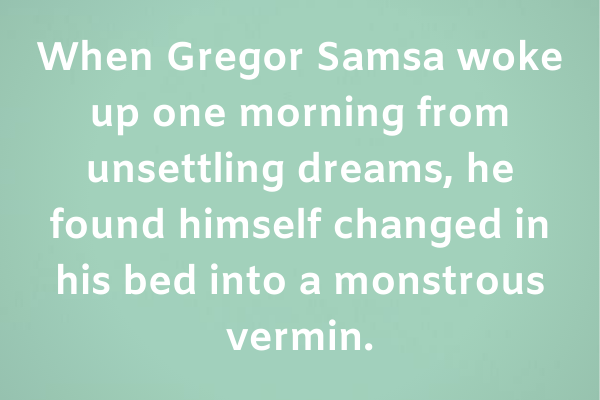 “When Gregor Samsa woke up one morning from unsettling dreams, he found himself changed in his bed into a monstrous vermin.” 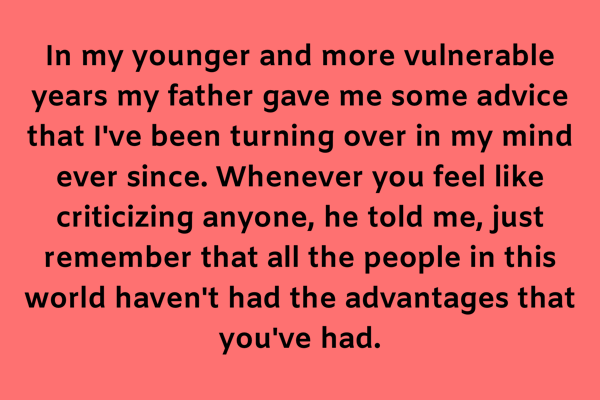 “In my younger and more vulnerable years my father gave me some advice that I've been turning over in my mind ever since. Whenever you feel like criticizing anyone, he told me, just remember that all the people in this world haven't had the advantages that you've had.” 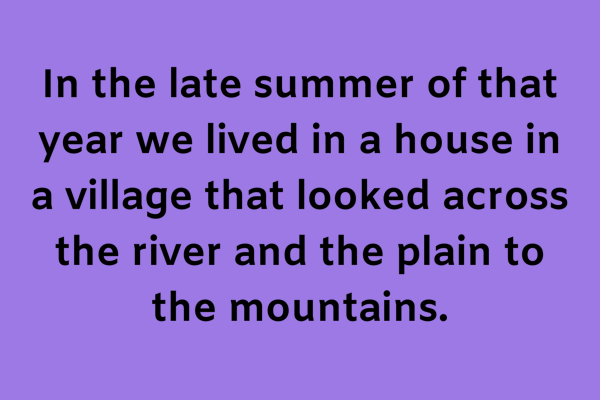 “In the late summer of that year we lived in a house in a village that looked across the river and the plain to the mountains.” 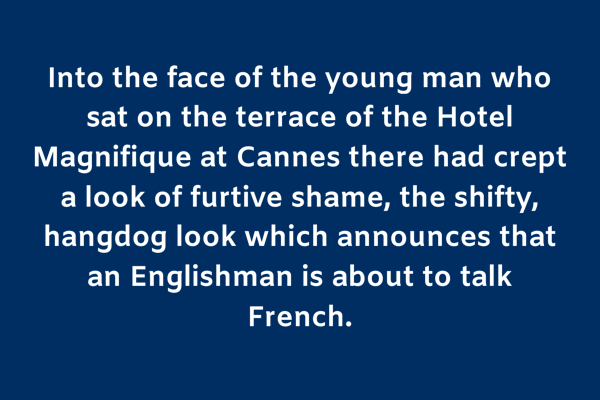 “Into the face of the young man who sat on the terrace of the Hotel Magnifique at Cannes there had crept a look of furtive shame, the shifty, hangdog look which announces that an Englishman is about to talk French.” 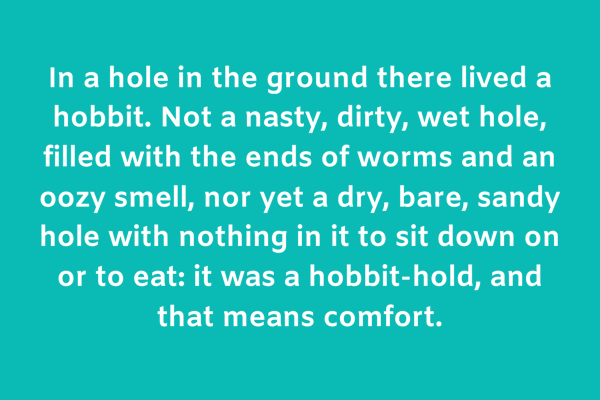 “In a hole in the ground there lived a hobbit. Not a nasty, dirty, wet hole, filled with the ends of worms and an oozy smell, nor yet a dry, bare, sandy hole with nothing in it to sit down on or to eat: it was a hobbit-hold, and that means comfort.” 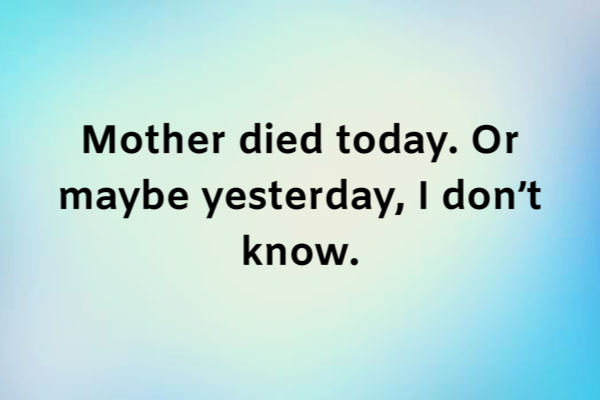