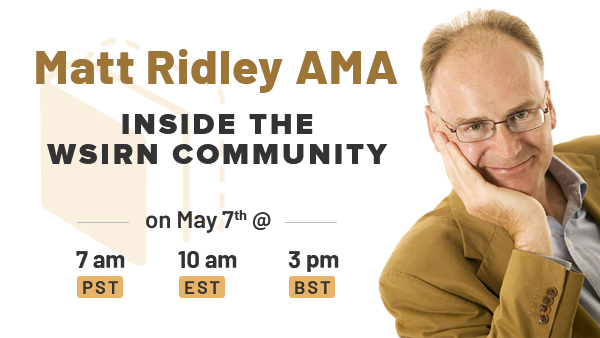 I'm delighted to break the news that our second AMA in the WSIRN community is with the British writer, businessman, and popular science author Matt Ridley.

It's happening on May 7th at 3 PM BST time, which is 7 AM Pacific Time and 10 AM Eastern Time.

Matt Ridley is a scientist, writer, businessman, and an expert on evolution. Earning his BA and DPhil degrees from Oxford University, Matt has served as a former science and technology editor for The Economist magazine. To this day, he continues to write regularly for The Times (London) and the Wall Street Journal and founded the Mind and Matter column in the WSJ in 2010. With expertise in both finance and science, Ridley is an author with a wide range of talents. He has written many provocative books on evolution, genetics, and society. His best-known books are The Red Queen (1993), Genome (1999), and The Rational Optimist (2010), which have sold over a million copies altogether and have been translated into 31 languages worldwide, winning multiple awards. 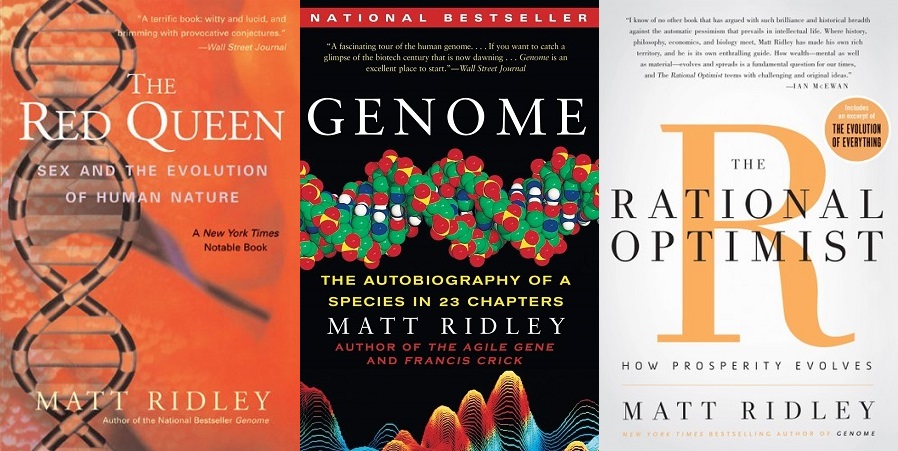 He’s frequently seen on stage, speaking about topics such as trade, economy, intelligence, innovation, ideas, and evolution. Matt’s TED talk on how the exchange of ideas drives innovation and progress has been viewed over 2 million times.

In a world with no lack of prophets of doom, Matt offers us some much-needed reassurance and hope, encouraging us to look at the world through a positive lens. Like the title of his popular book suggests, Matt is a Rational Optimist, which means he’s one of those very few authors and thinkers who promote an optimistic view of the future, arguing that human ingenuity and innovation have tackled every major obstacle we have ever come across and that our future will actually get better over the course of time. 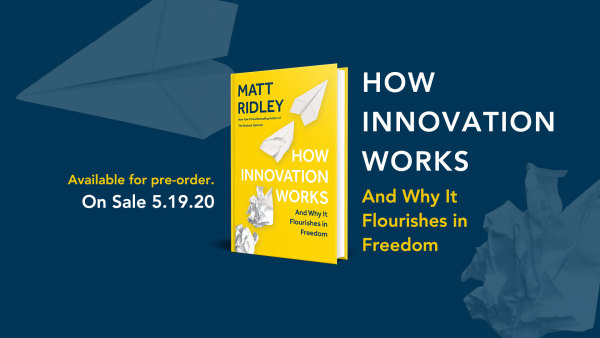 Matt’s upcoming book How Innovation Works goes on sale 19th May. In this new book, Matt builds on his national bestseller Rational Optimist, chronicling the history of innovation and convincing us to change how we think about this mysterious, inexorable process that has brought both dramatic improvements in our living standards and unsettling changes in our society. Matt goes back millions of years and leaps forward into the future to relate stories of scores of innovations and argues that innovation is an incremental, bottom-up, serendipitous process that happens as a direct result of the human habit of exchange rather than an orderly top-down process that advances according to a plan.

Matt is a fellow of the Royal Society of Literature and of the Academy of Medical Sciences, and a foreign honorary member of the American Academy of Arts and Sciences. He is honorary president of the International Centre for Life in Newcastle and has honorary doctorates from Buckingham University, Cold Spring Harbor Laboratory and University Francisco Marroquin, Guatemala.

Matt won the Hayek Prize in 2011, the Julian Simon award in 2012, and the Free Enterprise Award from the Institute of Economic Affairs in 2014. His books have been shortlisted for six literary awards, including the Los Angeles Times Book Prize (for Genome: The Autobiography of a Species in 23 Chapters). The Agile Gene: How Nature Turns on Nurture, won the award for the best science book published in 2003 from the National Academies of Science.

📅 Matt will be taking questions in our online community on May 7th at 3 PM BST time, which is 7 AM Pacific Time and 10 AM Eastern Time. 📅

To participate in the AMA, please sign up for the WSIRN community here.

The complete AMA transcript will also be published after the event on the WSIRN Blog.

Hope to see you there! 🔥