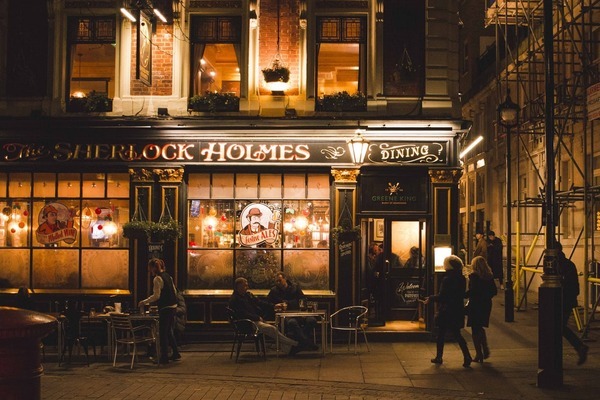 A London literary pub crawl is the perfect amalgamation of two diverse cultures. For an adult traveling through England’s capital, experiencing the local pub scene is an activity not to be missed. It comes with the opportunity to taste local ales, munch on regional grub, and enjoy friendly banter with a heavy dose of English humor. Add to that a literary heritage that dates back centuries, and a night out drinking can become an unforgettable bookish adventure. 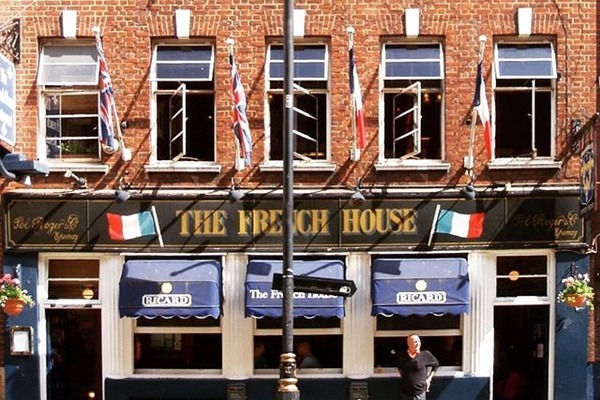 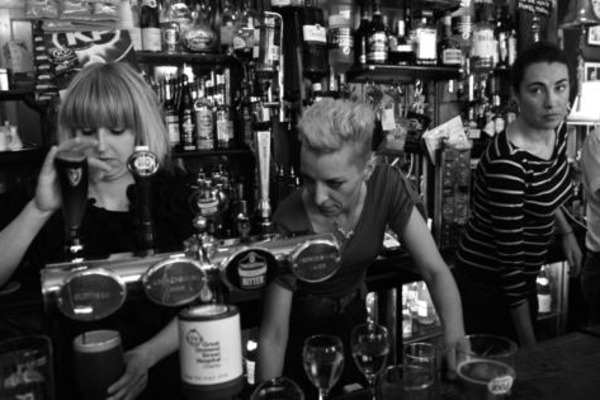 There are very few pubs in the world, let alone England, like The French House. Overlooking the irony of its name, The French House needs to be your first stop when searching for literary pubs in London. Popular with artists and writers now, as it was when greats like Dylan Thomas and Lucien Freud graced this space, the pub is much-loved for keeping things old-style and straightforward. They have a strict no-screen rule, which means you cannot use your mobile phone. There’s also no music, allowing conversations to flow amidst the general chitter-chatter of the bar. Plus, they also serve half a pint of beer, a rarity in London. The first-floor dining area at The French House features a daily-changing and limited menu. However, it’s a place where you don’t necessarily come for the food, but for its atmospheric environment that is a refreshing change from a typical night at any neighborhood pub. 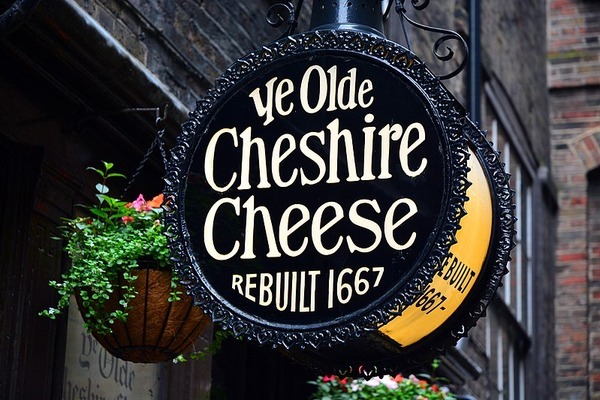 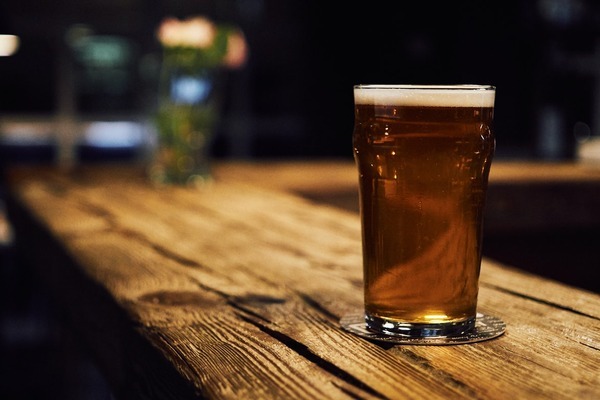 A must-stop during any London literary pub crawl, Ye Olde Cheshire Cheese is a classic when it comes to drinking establishments. Inside, the ambiance is dark, with minimal to no natural light, transporting customers to a different era, away from the hustle of the city outside. The pub features several rooms and bars, each one a delight to discover, featuring antiques and even the taxidermy remains of the famous Polly the Parrot. Among past patrons of Ye Olde Cheshire Cheese are Charles Dickens, George Orwell, Mark Twain, PG Woodhouse, Samuel Johnson, and G K Chesterton. When visiting the pub now, pick up their Ye Olde Burger or steak and kidney pudding, washing it down with a glass of your favorite local beer. 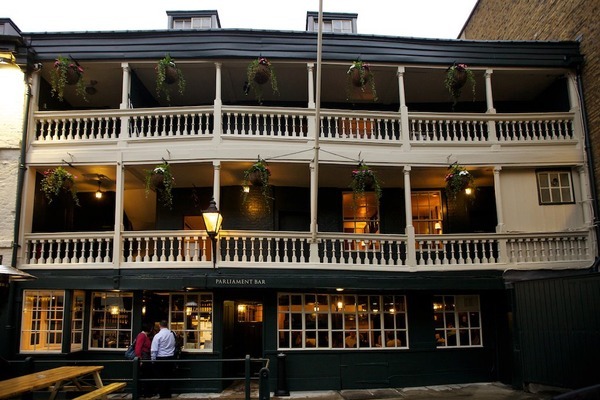 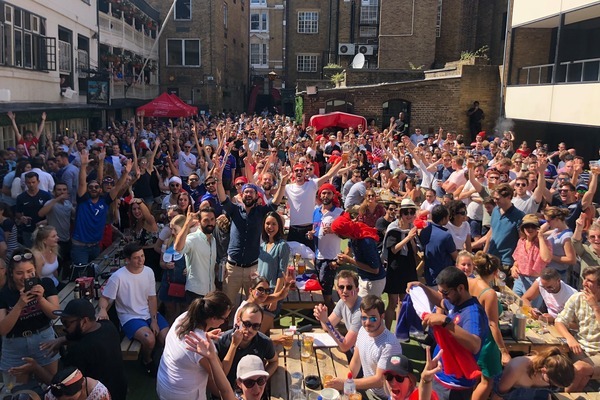 The perfect literary pub in London to wolf down a Sunday roast, relish some sticky pickle sausage rolls or snack on spicy biltong, The George Inn is one of the city’s most celebrated watering holes. Owned by the National Trust, it is the “last remaining galleried inn” in the region. A 17th-century coaching inn, the pub was probably one of Shakespeare’s hangouts, since the playwright lived in Southwark, a short five minutes away. Moreover, The George Inn also gets a mention in Dickens’ Little Dorrit and is covered extensively in Pete Brown’s Shakespeare’s Local. Famous with London residents and tourists alike, the Inn is known for its large courtyard, found packed on sunny days. 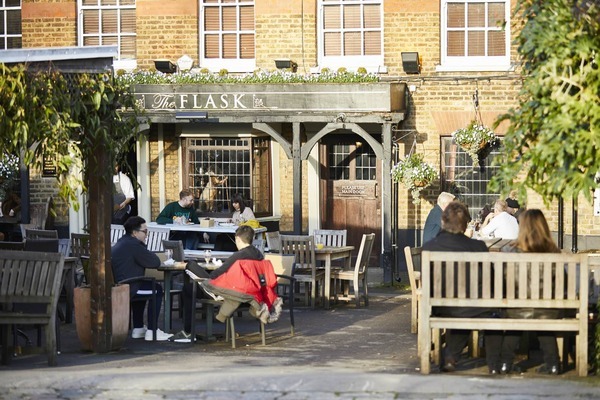 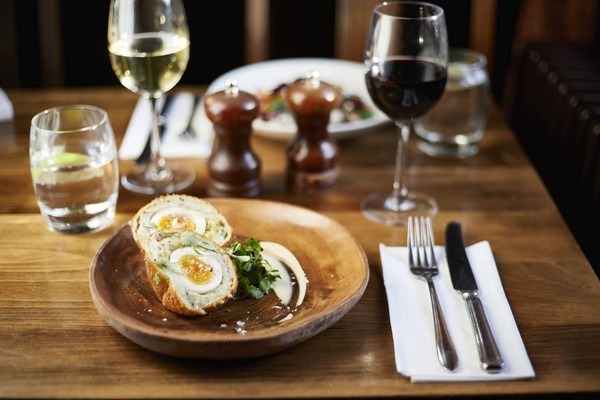 The Flask in Highgate oozes traditional British charm with its origins dating back to the 17th century. However, there’s also an alluring uniqueness to this place, where the old and new merge in perfect harmony, creating a space that is family-friendly and welcoming. The food at The Flask, as English as it might be, is contemporary in its appearance, but the mood is steeped in storybook greatness and ancient folklore. A pub with literary connections in London, its past clients have included Lord Byron, Keats, William Hogarth, and novelist Mary Shelley. Presently, The Flask is home to the spirits of a Spanish barmaid and that of a Cavalier, sometimes seen “vanishing into a pillar.” 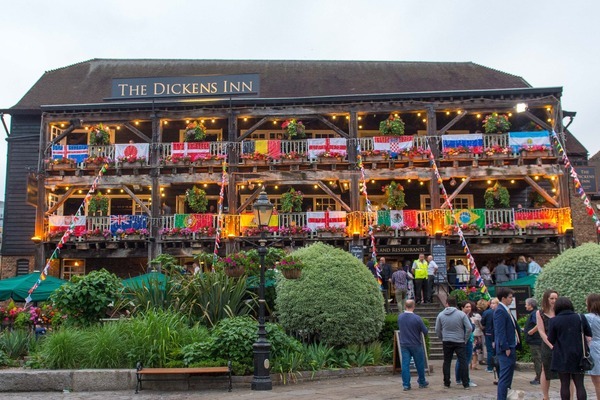 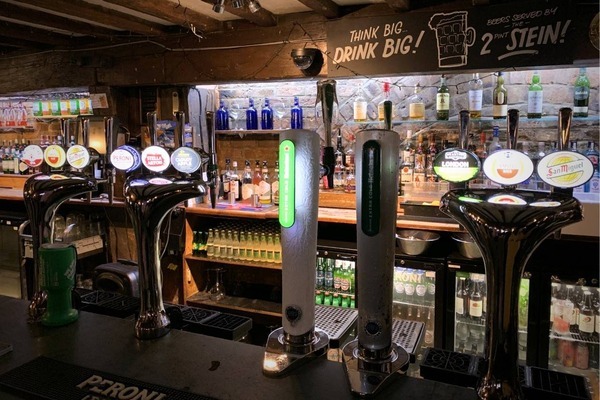 The Dickens Inn is an 18th-century warehouse, remodeled as a pub and restaurant, with bright and beautiful exteriors. Honoring one of the most loved writers to have lived in the city, this literary pub in London has an idyllic location next to the Thames River in St Katharine Docks. Although a tad commercial with heavy tourist traffic, it still manages to create an excellent authentic pub experience, elevated further by the Inn’s beer garden and balcony seating. The Tavern Bar at Dickens Inn is ideal for drinking beer while watching a soccer match with friends. The food menu has a range of comfort options such as beer-battered fish and chips, spicy pepperoni pizza, and mouth-watering desserts like Berry Eton Mess and Bramley Apple Pie.